Calaboose Cal is a recurring character in the Tom and Jerry Kids Show. He primarily appears in the episodes that star Tom and Jerry, but has starred in a few episodes of his own; the first being "Calaboose Cal 495" where Tom and Jerry were the secondary focus, and "The Mouth is Quicker than The Eye" which lacked Tom and Jerry from appearing in the episode. He lives in Costa Mesa, California. He drives a large green commercial van with his name logo on the sides, and the license plate reads CAL1. His company name is Calaboose Cal Mouse Rouster Co. of Costa Mesa, California, which is a pest-control company that eliminates mice, although he does not have co-workers. However, he plays other roles such as running game shows, racing competitions, and magic shows. His Catchphrase is "(insert line), Cal don't care. (insert line), Cal don't care. (Insert line), that's when Cal cares."

Calaboose Cal is a large cat weighing physically 250 pounds. His fur is blond. His muzzle is a light tan color. He has a thick, bushy tail. He also has fangs.

Calaboose Cal's primary apparel consists of a green flat-topped cap that has a white layer on the rear end with the signature black letter "C" which he wears backwards, a canvas zip-up suit that is pink on the upper half and sleeves but red on the lower half and legs, a black bow tie, and a pair of violet sneakers with white soles and white curves at the tips and lavender strings and accents. However, he has worn different apparel in some other episodes, but has always kept the sneakers with his other apparel. As a game show host in "Catch that Mouse", he wore a violet cotton two-piece suit (jacket and pants), a lime green shirt underneath, and a red necktie with three lime green dots, but retained his signature cap. As a host for racing competitions in "Calaboose Cal 495", he wore a cowboy suit with a pink top with darker pink accents and gold material on his upper sleeves and in the front, red pants, a white scarf, and a white cowboy hat with a red band. In "The Mouth is Quicker than The Eye" as his role as a magician, he wore a faded blue tuxedo with a high-waist red sash around himself and a two-button white shirt underneath, a white cape, and a white top hat with a black band, but kept the bow tie.

Calaboose Cal is depicted eager to get rid of mice whom many people consider to be viruses in contrast to cats. He talks in rancher jargon. However, he tends to be klutzy at times, especially in shows and competitions that he hosts, but doesn't give contestants a fair chance of winning.

Calaboose Cal's Voice Actor, Phil Hartman was a veteran of Saturday Night Live from 1986 to 1994, and did bit parts in His Voice Acting Career, including playing a few characters of The Simpsons and a few other cartoons. He died in Late May 1998. 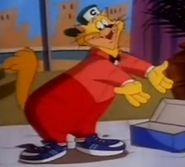 Calaboose Cal's usual clothes in his primary role as a mouse-exterminator.

Calaboose Cal in a suit and tie as a game show host.

Calaboose Cal in his cowboy apparel as a race announcer.

Calaboose Cal in a top hat, tuxedo, and cape as a magician. 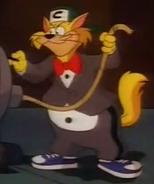 Calaboose Cal as a musician in a black tuxedo

Community content is available under CC-BY-SA unless otherwise noted.
Advertisement